Birhan Erkutlu and Tuğba Günal moved into the forests of Antalya to get away from it all. They wanted a natural, peaceful life free of capitalism, consumer culture, social media, the internet, even electricity. Fate had other plans.

Fourteen years on, the two artists are now figureheads of a campaign to protect rivers and trees from a cascade of hydropower plants. Their tweets and Facebook posts attract hundreds of thousands of followers. They use drones to expose wrongdoing. And they have overcome threats, warning shots and hostile political culture to lobby successfully for the creation of a new protected area.

“We have become guardians here without intending to,” says Erkutlu. “But now we see how many others are doing this around the world. It has opened our minds. Maybe our problems are small compared to the Amazon and elsewhere. But it is the same threats, the same courts.”

The Turkish couple’s high-tech activism is accidental. The artists have known each other from their teens. They left wealthy neighborhoods of Istanbul in 2004 and built a home in the Alakir Valley without electricity, telephones or internet. The goal was to explore the possibilities of an alternative lifestyle; to escape rather than confront consumer culture.

But it caught up with them five years later when they heard the sound of bulldozers and chainsaws near their woodland home. The Kürce HES power company were clearing land alongside the Alakır river so they could begin construction of a cascade of six hydroelectric dams.

“We decided to do everything we can to stop them,” says Erkutlu. “We saw birds raise chicks here. Squirrels and foxes too. After a while, they become like family. When someone comes to your home and starts to kill them, it’s a normal reflex to try to stop them.”

They changed tack. Abandoning a policy of isolation and total self-sufficiency, they asked friends for donations to help pay for a legal challenge against the project, then painted pictures, released albums and performed street art to raise awareness and funds. Most effectively, they have taken to social media to mobilize public opinion, posting photos of the destruction.

A backlash followed. Some in the local community turned against them for opposing a company that had brought jobs and tax revenue. Their visitors were threatened. Lawsuits were filed. Police called them in repeatedly for questioning. Shots were fired outside their home. The political climate in Turkey was also becoming more hostile to environmental activism. In 2013, a small demonstration to save trees in Istanbul’s Gezi Park from a shopping mall project morphed into a nationwide wave of anti-government protests that brought hundreds of thousands of people into Taksim Square. After that, president Recep Tayyip Erdoğan said opponents of development projects were traitors. Underscoring the risks was the high-profile murder in Antalya last year of two anti-quarry campaigners – Aysin and Ali Büyüknohutçu – who were shot in their homes on 10 May 2017, soon after winning a landmark court case against a marble company. The alleged killer said he was paid to carry out the hit by the company boss, but was found dead in prison before he could tell a judge. Guards said it was suicide. The case was closed.

“That was a shock,” said Erkutlu. “It was a message to environmental defenders that you can be killed and nobody will be punished.”

Their alternative lifestyle drew media attention to development issues that otherwise get little coverage in Turkey, which has the world’s worst record for arresting journalists.

The couple says the company has bought much of the land around their plot, felled swaths of trees – including oaks that were several hundred years old – and diverted the underground spring that was their main water supply.

The company says the hydro-dams are necessary for economic development, but the two artists have collaborated with scientists, lawyers and other environmental groups to reveal the plant is generating less than a fifth of its capacity, providing barely enough electricity for a single, mid-sized shopping mall.

“We don’t want to be seen as anti-hydroelectric. But to say that because of the climate you need more alternatives,” Günal says.

To demonstrate, they have installed a solar panel on their home. The photovoltaic energy has enabled them to operate drone patrols that exposed violations of environmental regulations. As a result, the company has received two hefty penalties. One more and its license could be suspended.

“We started by getting away from technology and now it’s ironic that we have become digital activists,” Erkutlu says. 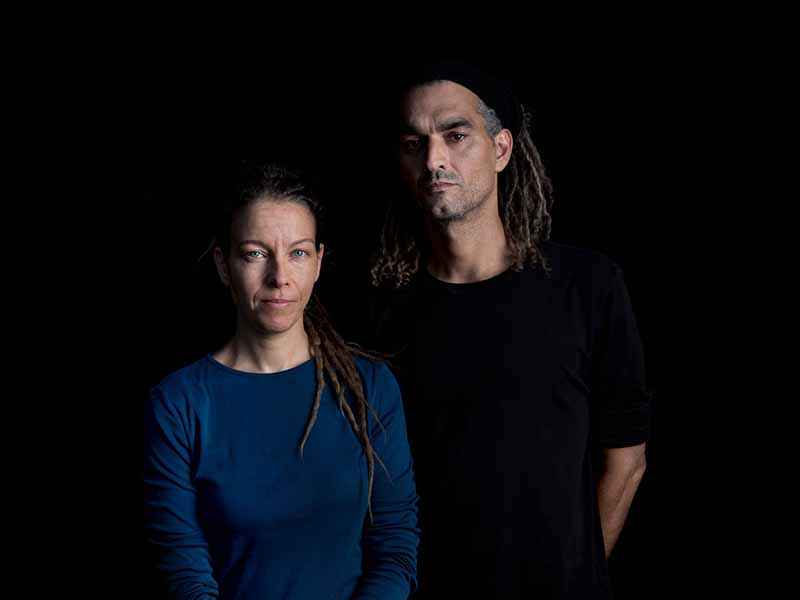 The couple is now connected by social networks to indigenous groups in the Amazon and Borneo, treehouse communities opposing opencast mining in Germany’s Hambach forest, anti-fracking campaigners in the UK and pipeline opponents in the US and Canada.

“We didn’t realize this at first, but it’s global,” says Günal. “If you want to protect the environment, you are treated as a terrorist. It’s everywhere now.”

But the cause is not hopeless. Public support for their campaign has prompted the government to create a protected area at the source of the Alakir river and to scrap two planned dams. The couple said more environmentally conscious urbanites should move into the countryside.

“If we weren’t here, none of this would be here,” said Erkutlu. “The more people do what we do, the more areas will be guarded. Local people are not so educated and they are very afraid. But if you know the laws you can struggle. We are just two people from Istanbul. If we can do this, anybody can.”